Ten years on - the critical lessons I learnt from 2008

Ten years ago the equity and financial markets were in the middle of an unprecedented period. My interactions with the markets around that time were the ultimate proving ground for putting into practice what I had learnt and developed over the previous few years, and my experiences over those few months helped propel me forward as a trend follower.

Some of it wasn't easy, and some lessons learnt (and re-learnt!) cost me money. But in the long run, the tuition fees paid have been covered many times over.

Here are some of the lessons I learned from that time, which still form part of my overall approach:

Developing the patience and discipline to follow my rules

2008 was a valuable learning experience in letting my rules take the strain when trading - and how this came about wasn't even related to the markets!

You see, in the July of that year, my son was born. There were some complications surrounding his birth which meant spending a lot of time at the hospital until things started settling down.

At that time, the use of mobile phones was prohibited in the wards, and the signal was very poor in the public areas. So I had no way of keeping track on what was happening. I therefore was forced to place faith in the rules I had developed, and had to wait until visiting hours were over when I could return home to catch up on events.

In retrospect, while other things at the time were far more important than making a profit or a loss, this period did allow me to develop the mental ability to simply let things happen.

Let me put it another way - had I been watching the markets all day, seeing every little bounce or counter-trend rally, I'm sure my development as a trend follower wouldn't have been as pronounced.

I had to accept that I couldn't influence anything, so my exit and stop rules combined with risk control came to the fore. I learnt to let go and view price action which didn't violate my stops just as 'noise'.

Ignoring the temptation to predict what will happen
That said, on quite a few occasions in this period, I couldn't resist taking some profits off the table after some stocks had exhibited some dramatic drops (In 2008 I was mainly trading short positions). Of course, without there being a clear exit signal being given, this was the wrong thing to do. But as volatility started to increase, I was also seeing plenty of open profits evaporate due to the short, sharp rallies which could occur (more on that below).

When I later analysed all this, I found that, in overall terms, trying to be 'smart' and cashing in for fear of losing open profits led to a reduction in the overall profits which were achievable. Which is why I am so hot on this aspect when talking to other traders these days...

Out of this I later developed additional rules on when to take profits based on multiples of open risk (i.e. when the trailing stop significantly lags current price).

Embracing volatility
In February this year, some people relatively new to trading were freaking out at the sharp moves in the markets, at a level of volatility they had never encountered.  But as I tweeted at the time, when compared to the levels of volatility seen in 2008, they were nothing.

Of course, after I tweeted this, on the next Monday the Dow experienced an intra-day drop of more than 1,500 points. Maybe some of these people had been suckered in by the low volatility uptrends in the last quarter of 2017 and into early 2018 - if so, they will have learnt some important lessons themselves in that period. 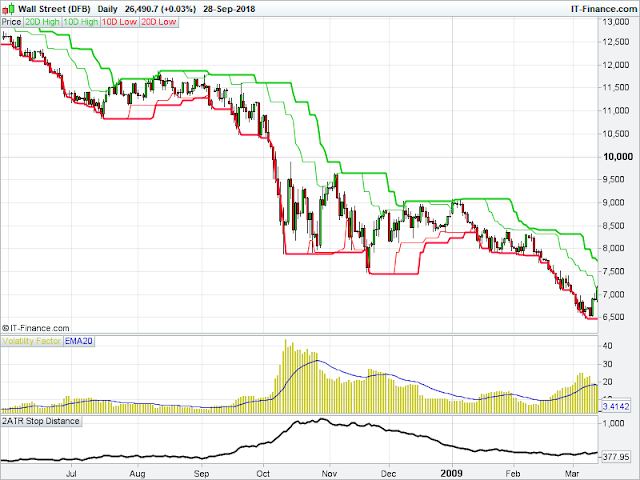 Some points to note:
Hopefully now you can see why I said the volatility in 2018 was not as high in comparison to ten years earlier.

No matter how irregular these periods are, having to deal with volatility like this is critical in becoming a successful trend follower.

Given that my own approach to trading is loosely based on the Turtles methods, the use of volatility-based position sizing calculated by way of a multiple of Average True Range has been a key component of my trading approach. Yes, you can take a position in a stock or instrument with a higher ATR reading, but that will automatically mean taking a smaller position size.

Over time, measuring volatility has become a key component in my own trading. I talked about this more here.

As an example of this, the scans I use factor in looking at volatility, and in February 2018 I was getting no opportunities coming up - long or short. Due to the spike in volatility, the scans were automatically keeping me out of the markets, meaning I missed a lot of the inherent choppiness and the associated stress. The lack of trading opportunities which met my criteria basically kept me out of the markets until the middle of March.

Dealing with Market Intervention
In September 2008, I was holding a number of short positions which were doing well. Included in these were some of the major UK banking and insurance stocks.

Then, the FSA (as it was, now the FCA) announced a ban on the short-selling of certain financial stocks. This was also announced by the SEC in the US. Overnight, the profits in those stocks affected had disappeared and I was stopped out due to the resultant price spikes against me. Some of those spikes meant that prices rose to levels not seen for several months.

What made it even more frustrating was that, bar those one day spikes, prices quickly started falling back and, within a couple of weeks, had in most cases fallen back below those pre-announcement levels, and carried on falling into the end of the year.

While this was certainly not as dramatic, or as financially painful, as the lessons some of the Turtles learnt on the day following the '87 market crash, it was an important reminder that anything can happen, at any time - particularly when there is forced market intervention.

The combination of those lessons I learned above, plus with what I was seeing with my own eyes on my screens, proved to me that trend following did work.

A friend of mine went through this same process a few years later, where the markets 'tested his mettle' and he found it really difficult to let things play themselves out, but as he later said, "NOW I know it works". His case study is here.

Knowing and seeing what can happen in a trending environment gives you so much as a trend follower, but primarily it is having the ability to accept that you can sit through the poor or non-performing periods knowing that, once trends start to appear, you will be best placed to capitalise on them.
Posted by Trader Steve