Below is a daily chart of the FTSE which clearly shows a lack of a meaningful trend over the last few months. On this timeframe, this is a volatile, non-trending state which are the worst conditions for a trend follower to deal with. As a result there have been few opportunities to profit from UK stocks. Compared to say the German DAX or the US indices, which have made repeated multi-year or all-time highs in the same period, you can see how the FTSE has been lagging. 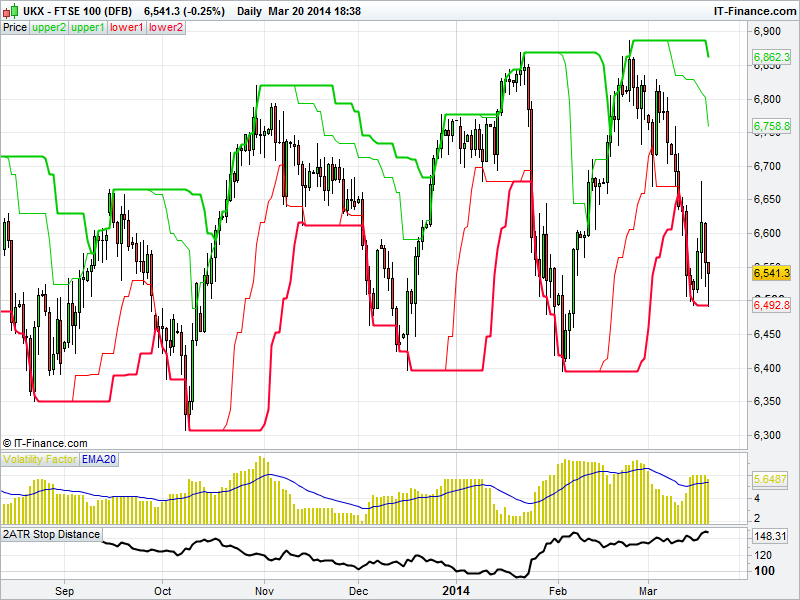 Now, as  regular readers will know, we have recently started trading a longer term trend following system, based on the weekly charts. This requires even less time per week to scan for new trades, or update existing stops. It is clear from the weekly chart below that the FTSE has been stuck in a range since the May 2013 high was reached. As a consequence the Volatility Factor indicator is showing a very low reading. This last time this indicator was as low was in November and December 2012, and it is clear from the chart what happened once there was a breakout. 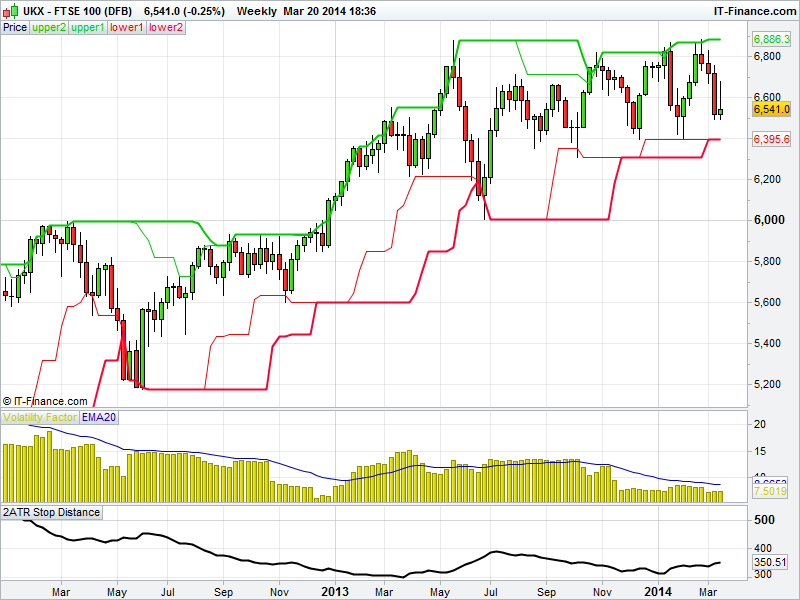 Generally when the reading gets this low it is a signal of an impending new trend - it is like the coiling of a spring. Go here for more on the Volatility Factor indicator, as well as Paul Tudor Jones' comments on range expansion. The use of this indicator forms part of the ‘visual characteristics’ that we look for in potential setups. As an example, here is the chart of the Japan Nikkei from last year showing those same characteristics: 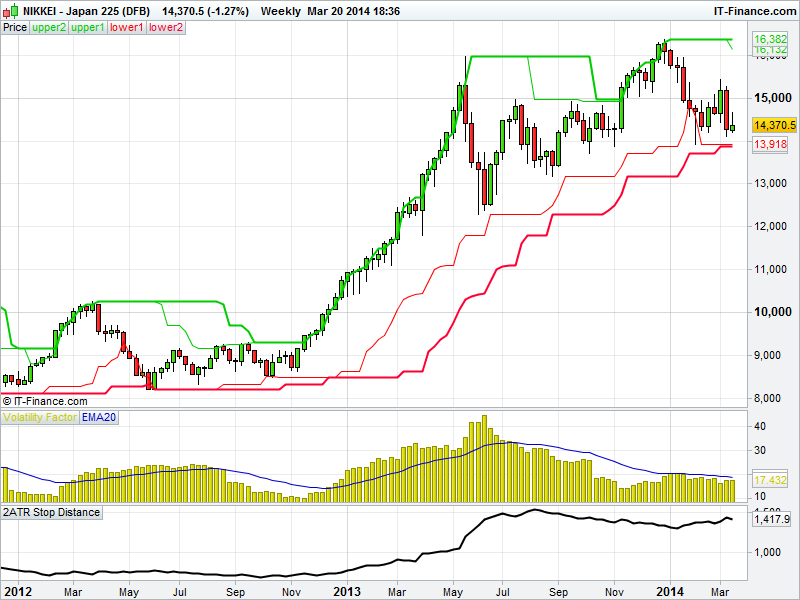 What we don’t know at this stage is in which direction the new trend will go, or the timing of that. But the potential is there for a move – may be a big one. Being a trend follower, and having a strategy which enables you to go long or short, may allow us a great opportunity to profit in individual stocks from such a move.


Back in December 2012, I wrote the following on the blog, after reviewing the indices using simple monthly charts:


“If you consider yourself to be a longer-term trader (or investor) then looking at charts on this particular timeframe is a great basis upon which to identify longer-term trends, and to identify when such moves have come to an end.

They also fill a trend follower (such as myself) with a degree of anticipation, as no doubt a pronounced trend will start in some, or maybe all, of these markets in 2013, which will no doubt fuel profit-generating trends on shorter timeframes, such as the daily timeframe that I predominantly use.”


When I wrote that, I did not know that within a month, a big new trend was going to take off. However, the potential was there - it was a matter of being patient and waiting for the signal. If you look at a simple monthly chart of the FTSE now, you will see an even tighter consolidation than I discussed back then.

2014 has been a tricky year so far, meaning that being lightly invested, and exhibiting patience and discipline has been the way to go. Yet, profits have been made. And that is in a non-trending market...

If you would like to learn more then consider either some 1-2-1 training, or joining our mentoring programme ,and learn how to profit from trend following.
Posted by Trader Steve