Some nice trends a friend has traded

I had a long conversation the other night with another trend follower who I met and gave some 1-2-1 training to earlier this year, discussing both the current market situation as well as individual stocks that are trending well (in both directions). I greatly enjoy these conversations, as not only he appreciates any pointers I can give, but it also gives me pleasure to hear how well he is doing. He was already aware of trend following as a concept before we met, and because he has read up on the topic, has the psychological and risk management sides sorted out pretty well.

We met in February this year, so he started following the system just as the market stopped trending and volatility started increasing - such is life! However, as he knew the strong historical performance of trend following, and has been able to 'stomach' a drawdown, he has able to remain confident in the system and avoid chopping and changing parameters, second guess trades, and stick to the rules. As he said, even those trades which didn't work out were 'good bets' (refer to this post for what he is taking about).

As a result, he is now starting to profit nicely from identifying potential opportunities using the scans and system rules, of the general market conditions. This will give him further confidence going forward, so that when a REAL trend in the markets takes off...

Although there is a lot of indecision in the general markets at the moment, he has proved it is possible to still to be generating returns in individual stocks by using a trend following strategy. Below I've shown some charts of trades that he identified using the scans as described in my e-book, and from which he is currently profiting nicely.

Here is Kofax on the short side, which was discussed in the members' chatroom at the time of the initial breakout. 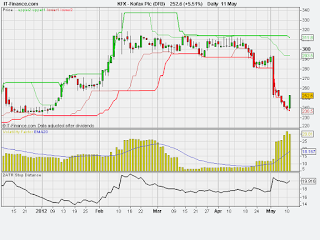 On the long side, here is Enterprise Inns, which is also doing very nicely: 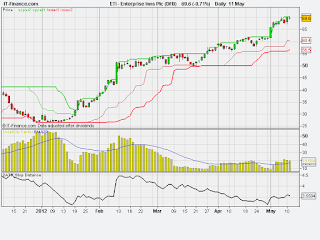 As I've mentioned here a while back, investment trusts tend to trend very well, and here is one such profitable position that my friend is currently short on: 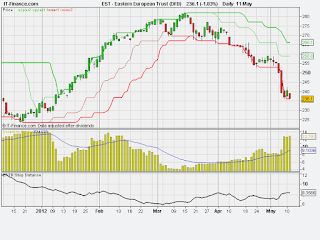 We also discussed trading other instruments such as forex, indices, commodities etc using a trend following strategy. Again, as I have discussed on here before, I have personally found that, once you get into a trend, stocks tend to generate better returns than those other instruments. I would stress that this is the result of my own personal experience.

Most CTA's utilising a trend following strategy trade a small basket of 20 or so commodities, index futures, forex etc whereas the individual trader is not restricted in the same way. We have a potential universe of thousands of stocks to trade from all corners of the world. As a result, if you are able to find a chart setup that meets your crtieria (and using stock scans can help you do this) then you will find those occasional big trends which generate profits for you.
Posted by Trader Steve