A big riser - and then faller

Chariot Oil and Gas fell by approximately 50% yesterday after disappointing news was released. A quick glance at the charts shows that a good short signal was given several days ago, which would have generated some nice profits. This chart is another great example where following the trend both in the uptrend up to the beginning of April, observing your stops and then acting on the subsequent short signal keeps you on the right side of the trade. 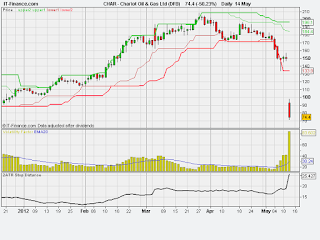