There is a famous quote in Market Wizards from Ed Seykota: "There are old traders, there are bold traders, but there are no old, bold traders". What Seykota was referring to here was the higher degree of risk per trade that younger or less experienced traders seem to take.  As is clear from reading his own writings, or those relating to other famous traders, often early on in their careers, most endure a significant event whereby their lack of rigid risk control has been exposed, resulting in a major loss of capital.

Where traders, and in particular trend followers, DO need to be bold is in following their system signals to enter or exit a trade, particularly when it appears to go against mainstream opinion, or fundamental and economic data. This is particularly apparent in the recent moves in the major indices. Despite the pessimistic view on a looming economic crises, the FTSE is now in sight of the 6,000 level, and the Dow is close to 13,000. The Nasdaq is at multi-year highs. Those simply using their economic beliefs, without any regard to price action, would have been burned so far in 2012. 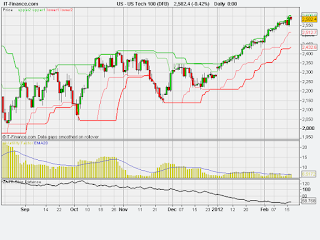 Trend followers would have seen the long signals given around the turn of the year and would have acted accordingly, flying in the face of the perceived wisdom and would would have benefited as a result. Of course, this does not always happen, as in large parts of 2011, and that is where good risk control would have restricted any losses. However, if the markets DO do go higher from here (and nobody knows what will happen) then those trend followers who have already accumulated positions on the long side will handsomely profit in the days and weeks ahead.
Posted by Trader Steve