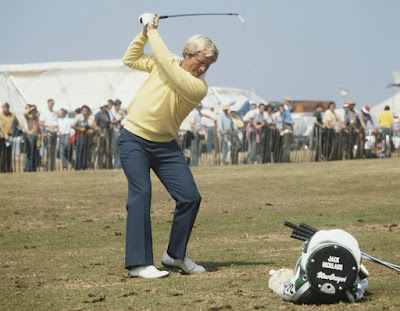 A couple of my more popular posts from past years relate to Jack Nicklaus, where I listed a number of quotes from his extensive writings and interviews over the years.


Below I've pulled out a few more of nuggets of wisdom from The Golden Bear, which again may require some thought on your part, but the underlying message can easily be applied to your trading and mindset:


"Perhaps my greatest inherent gift in regard to golf is the ability to compartmentalize my mind, to switch it at will totally from one activity or concern to another, then, for the required duration of the new focus, blank everything else out 100 percent."

"I don’t think you ever will yourself to win. I think you prepare yourself the best you can, get yourself in the best mindset you can get in, and go after it."

"I never hit a shot, not even in practice, without having a very sharp, in-focus picture of it in my head."

"I never used golf as a job. I used it as a game. I always thought if I played the game well, my financial rewards would be there, but it came from, because I played well. But I had to play well to get the financial rewards."

"I’m a firm believer in the theory that people only do their best at things they truly enjoy. It is difficult to excel at something you don’t enjoy."

"Life is an adventure. You do the best you can to plan, but you never know what’s going to happen. It’s kind of nice to not know what is around the corner. That’s the adventure."

"Nobody – but nobody – has ever become really proficient at golf without practice, without doing a lot of thinking and then hitting a lot of shots. It isn’t so much a lack of talent; it’s a lack of being able to repeat good shots consistently that frustrates most players. And the only answer to that is practice."

"Professional golf is the only sport where, if you win 20% of the time, you’re the best."

"Temper is the one thing you can’t get rid of by losing it."

"The successful people seem to have blinders on. Everything is straight ahead. They go forward and know exactly what they’re going to do once they’ve made up their mind to do it, and by God they don’t look sideways."

"There isn’t a secret to golf, of course, but no real player will ever believe that."

"You have to love something and have a passion for it to be disciplined. My commitment was purely to golf."

"You’ve got to have the confidence that you can win; you’ve got to expect to win. If you don’t, you have no business being there."

And finally, on being asked why he was the most successful golfer in terms of winning major championships:

"I was able to carry on playing my own game for longer than anyone else."

My previous Nicklaus posts are here: