“I don't risk significant money in front of key reports, since that is gambling, not trading." - Paul Tudor Jones

When you are trading, the only elements you can control is when to enter a position, where you place your initial stop, your position size and the amount you are willing to risk.

Once you are in a trade, you have no influence over what will happen - the market (being other buyers and sellers) will determine future price direction, and consequently whether your position goes into profit or a loss.

You of course do have control over where you place your initial or trailing stop, but you do not always get out at those prices - particularly if you end up on the receiving end of a price shock and a resultant gap against you. As a result, there is always a risk that you can lose more than your initial risk on any trade.

Earnings releases are, in Rumsfeld-speak, a "known unknown". We know when they will occur, but we cannot predict or quantify their effect on price. Therefore, there is always potential downside risk attached to them. Some announcements may see price move in your favour, others can go against you.

This week we have seen two big-cap Nasdaq stocks suffer large price gaps following earnings releases. The charts of Facebook and Twitter are below.

With Facebook, we can clearly see the strong uptrend that has been in place for a while. As it is, the price gap suffered following the earnings release took price back to where it was in late April.

Looking at this chart, if you had entered at the end of April when the uptrend started, pretty much all of your hard-earned profits over the last three months would have been wiped out. 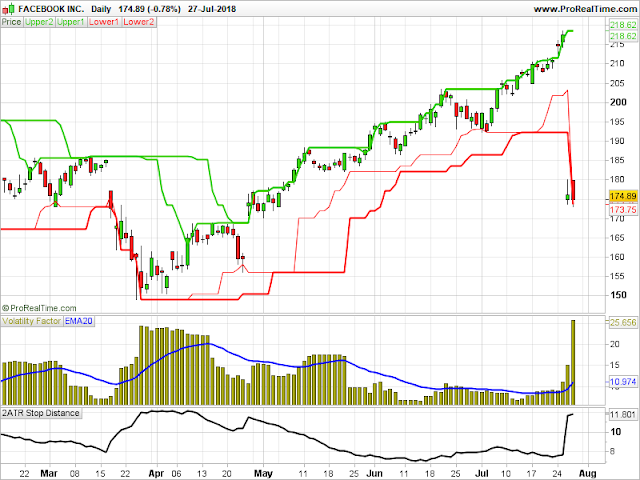 Turning to Twitter, this actually gave a nice entry signal towards the end of May, which would have generated an approximate +3.6R profit before the trailing stop was hit in on 28 June. Since then, price had meandered with no conviction in any direction. Until earnings came up, and another 20% drop in a well-known stock. 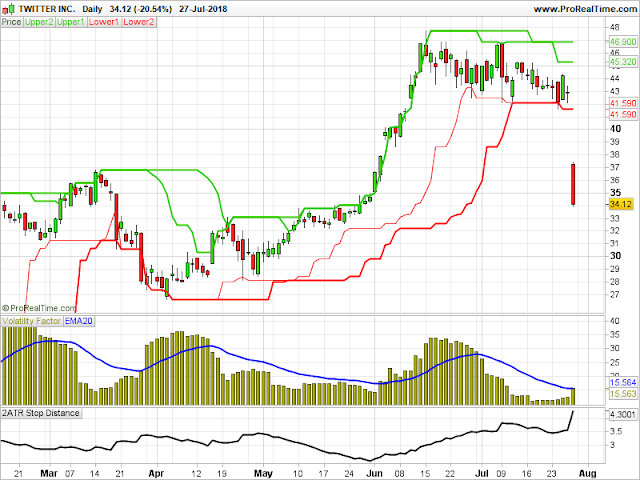 And while I do not show them on the charts, these are both examples where before the price gaps occurred, price was  above commonly-used trend 'filters' such as the 50 and 200 day moving averages. Facebook was at all-time highs, and Twitter was at price highs not seen since 2015.

So even when stocks like these have such elements in their favour, people can still lose either a significant chunk of their open profits and/or equity when price gaps like these occur.

Price shocks like this can occur at any time, and they are not the sole preserve of earnings releases. Using Rumsfeld-speak again, we can be subjected to "unknown unknowns".

Examples of these include sudden profit warnings, takeover announcements (if you are short on a stock), or maybe an FDA rejection of a new drug developed by a Biotech company. The most infamous and extreme example of an "unknown unknown" in recent times was the Swiss Franc price move in early 2015.

So what can you learn from these examples?
How you deal with these types of issues generally comes back to controlling both initial and open risk, and is something I have spent an increasing amount of time dealing with when mentoring traders.

Remember that you need to protect yourself emotionally and your equity to the potential downside as far as you can from "known unknowns" such as earnings releases, as well as possible "unknown unknowns".
Posted by Trader Steve