Are you a Borg or a McEnroe? 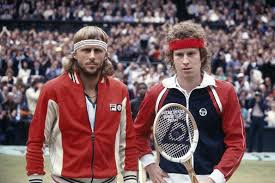 Given that this year's Wimbledon is currently in progress, I have a tennis theme to this post.

Any trader who has been profitable over the long-haul has developed a method and mindset that works for them.

In my opinion that is the way to be, but that statement is not complete. Behind that, it is quite possible to go through emotional ups and downs on a daily basis and be successful.

To totally suppress your emotions may well be detrimental to your performance, or even unhealthy.

It's how you deal with the highs and lows and how they affect your subsequent thought processes that is critical.

I know of a few hot headed traders, yet they have thrived.


How have they done it?

They may scream and shout at the screen (I've met a guy who even has a punch bag in his office!) or even throw furniture, but after they've had that 'release' of anger and frustration, they clear their head. They also ensure that, without fail, they have got over their emotional outburst before they resume trading, so they can plan and execute in an unemotional, rational manner.

In sporting terms, and going back to the Wimbledon theme, the example I often think of here is John McEnroe.

He was the polar opposite to his great rival, Bjorn Borg. One was quiet and seemingly unflappable, the other always looking for an argument. Yet they were both ultra successful.

How many times did McEnroe win the following point or series of points after an emotional outburst against the umpire or the crowd? He seemingly flicked an internal switch that allowed him to put whatever had just happened out of his mind, and concentrate fully on the next point.

He used that to spur him on.

And that was the key. He 'released' his emotions, before getting on with the job. In his case, he turned a negative into a positive.

In his book Enhancing Trader Performance, Brett Steenbarger gave a real-life example of two traders he worked with, Al and Mick, who had opposing personalities like Borg and McEnroe.

One kept his emotions and discipline in check all the way through. The other was agitated and wound up, in a highly emotive state, and took losses personally - even to the point he overrode his stops on occasion.

One never made it long-term as a trader. The other was a multi-million dollar performer.

Who do you think was the more successful trader?

A trader I know has a routine where after a bad trade he phones a friend or fellow trader up, chews them out, calls them (and the market) all the names under the sun, before slamming the phone down. His friends know he means nothing bad by this - it is part of his routine of releasing his emotions and negative energy. Mind you, he's gone through about a dozen phones in the last five years or so...

This emotional release phase can be summed up best by the following quote from Stoic philosopher Epictetus:

"It's not what happens to you, it's how you react to it that matters."

In this case, the emotive trader needs to find some way of releasing that energy, and get over it quickly, before regaining his focus, clearing all the negative energy away, and getting back in the correct mindset BEFORE thinking of going back into the market.

If you miss that crucial step out, that is when you can affect your self esteem, may start revenge trading, take on excessive risk, or even take on trades that do not meet your own entry criteria, and start to go down the self sabotage route.

As always, the key is to find which approach works for you. If you can though, avoid throwing furniture or your phone - that can get quite expensive...
Posted by Trader Steve