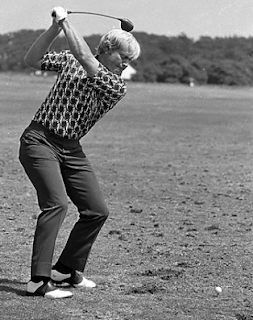 One of the most popular posts on this blog is 'Jack Nicklaus and trading', where I listed a number of quotes the Golden Bear made over the years. These should have a particular resonance when placed in a trading context, be it your own approach to the market, or the psychology involved.
Below I've pulled out a few more of Jack's quotes, which again may require some thought on your part, but the underlying message can easily be applied to trading.

"I never worried about money, except that I knew that all I had to worry about was golf. As long as I could play, I was going to make money."

On you against the markets

"If there is one thing I have learned during my years as a professional, it is that the only thing constant about golf is its inconstancy."

"So many of these fellas think they can come right out of college and make a living in pro golf. Look, we're not much different from doctors. A young doctor doesn't expect to do open-heart surgery the day he graduates from medical school. He has to spend so many years learning, and he's hungry and maybe broke during that time. He doesn't begin to make it until he's really ready to do a job. It's the same with the pro golfer."

On learning from others

"I haven't fundamentally changed my golf swing since I was 13 years old, but I've never stopped trying to increase my versatility as a shotmaker. Pride has never stopped me from seeking help in this area. Much of the knowledge I possess I've cribbed from other tour players, both by watching and asking."

"No great golf course was ever right at the start. Golf courses aren't built... they evolve."

"There isn't a secret to golf, of course, but no real player will ever believe that."

"A golfer should always stay with what has become natural."

"My swing isn't pretty like Snead's or functional like Hogan's. But the most important thing about it, to me, is understanding it - being able to take it apart and put it back together again. A lot of players on the tour don't know what to do about it when something goes wrong with their swing. Arnold knows; I think I know pretty well, too."

On Trading psychology and working on yourself

"You attack a golf course mentally, not with your swing."

"Self-control demands self-honesty above all else. Learn to fight emotionalism with realism. Accept first and foremost the cold fact that every shot you hit, good or bad, is the product of only one person: YOU. Accept, secondly, that you rarely if ever will play or score quite as well as you think you can and should. I never have."

"Golf never was intended to be, never has been, and never will be "fair," in the sense that other games either are fair innately or have gradually been made more so for purposes of mass entertainment. The mathematicians might try to convince golfers that, by the law of averages, they enjoy as many good breaks as they suffer bad ones, but it never seems to work out that way to most of us."

"The worse you're performing, the more you must work mentally and emotionally. the greatest and toughest art in golf is 'playing badly well.' all the true greats have been masters at it."

"If you find yourself in a position where you hope for luck to pull you through, you're in serious trouble."

"I like trying to win. That's what golf is all about."

"Talent isn't as important as the work and dedication necessary to become competent."

"Pressure is what you live for...if you are going to be successful in life, you're going to have pressure."

"My ability to concentrate and work toward that goal has been my greatest asset."

"Ask yourself how many shots you would have saved if you always developed a strategy before you hit, always played within your capabilities, never lost your temper, and never got down on yourself."

"Scoring comes from being able to preserve what you’ve got and play your smart shots when you need to play them and not do stupid things."

"There is no room in your mind for negative thoughts. The busier you keep yourself with the particulars of shot assessment and execution, the less chance your mind has to dwell on the emotional. This is sheer intensity."
Posted by Trader Steve