The chart of asset management firm Man Group makes for interesting viewing. Their flagship AHL fund implements a number of trading strategies (including following trends) yet from the movement in the stock price it would seem it hasn't performed too well recently. Maybe they should have traded the short signal in their own stock, which yielded a near 5R profit earlier this year, and which has now given a further breakout signal to the downside.

A bit of trend following trivia for you - Market Wizard Larry Hite formed Mint Investments in 1981, a very successful trading firm using systematic trend following models, and went into a 50:50 partnership with Man Group in 1983. Nowadays, he is President of ISAM USA (who run a systematic hedge fund) alongside Stanley Fink, the former CEO of Man Group. When Fink left Man Group in 2008, its share price was almost ten times what it is now. Coincidence? 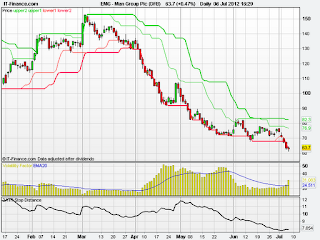