Some pointers for you

I've shown charts of three US stocks that to highlight some points of interest which are covered in my e-book.

Dean Foods was the subject of a recent post here and it's still trending up nicely. Remember this broke out to the upside after failing to break down while the general market was going down, and therefore was showing good relative strength. Now that the trend is developing nicely, there's no need to run for the exits here - just trail that stop up as per the charts (and remembering to take into account the spread when placing your stops), and keep holding until the trend ends. 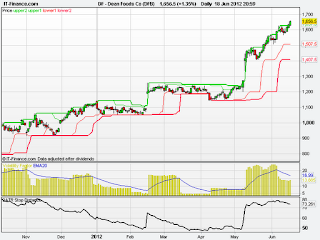 Stun gun company Taser sports a curious chart in that the trends apparent here seem to have been the inverse of the general market! After an uptrend towards the end of last year, the stock went into a profitable downtrend from mid-December through to mid-March, while the markets were trending up nicely. Then it formed a new base and broke out to the upside near the end of April, carried on up through out May and is currently consolidating. As I've said before, I try to have one or two stocks that are going in the opposite direction to the general market, as they can highlight unusual relative strength or weakness in a particular stock. This is a prime example of that. 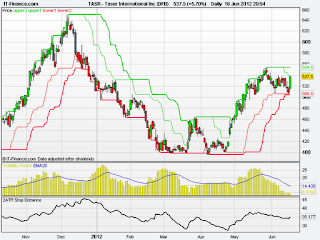 The final charts is that of Arena Pharma. As you can see, this gave a false start during April when the previous long signal only produced a small profit before being stopped out. However, a new long signal was generated just before the big gap up towards the middle of May, then consolidated, before moving on up again. This is a good example of a good looking set up that failed (which can easily happen), but then gives you a great trend on the next signal. Failed signals like the first one are frustrating, but they are part of the game for trend followers. As an example, imagine you traded  a basket of commodities, and gold gave you six failed trades in a row. Would you take the seventh signal, which happened to be the one that generated a huge trend, and covered the losses of the previous six trades and still gave you an overall profit? Just because a stock (or any instrument for that matter) generated a loss on a previous trade, if the setup still looks good, you should consider trading it. Arena Pharma is a great example of that. 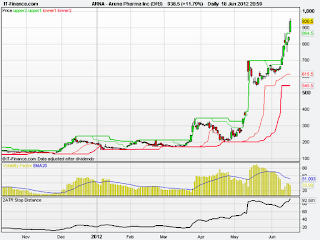