It should be clear to anyone who has read my blog, or knows anything about trend following that:
As it happens this week has seen short signals given on silver, gold and now the FTSE100 (not really surprising given the number of large cap miners in the index). There appears to be a certain amount of disbelief around as to why precious metal prices are falling, particularly silver. If you read the fundamental story, it would appear to be very bullish. However, prices are falling, and there are people acting upon that fact.

My own system first gave the signal a couple of days ago, as shown in the chart below. 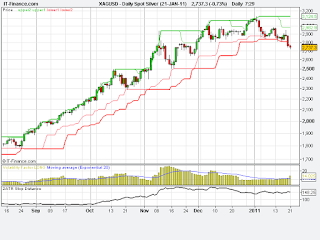 I do not trade commodities, but the vast majority of trend following systems in use solely trade a basket of currencies, commodities, indices and interest rates. Trend following systems, in their purest form, are very simple, almost crude, systems that respond solely to price - their beauty is in their simplicity. These systems embrace the volatility that comes with trading these instruments, can withstand a pre-determined level of volatility, and only exit when that level is exceeded, bringing the existing trend into question. My own system is based upon these well known systems, however I have incorporated a couple of additional filters as I prefer to trade stocks.

So, these trend followers then - potentially who are we talking about here?
These are just the tip of the iceberg - thousands of other successful CTA's and private trend followers who use similar systems, dotted around the globe will have got the same signals, and will have acted in the same manner. These traders have hundreds of millions of dollars at their disposal, and as soon as their systems give a signal, those funds are put to work, regardless of the fundamental story.

(edit: I do not know if these traders are actually short silver, simply that, based on their historical performance and the nature of the systems that they employ, at some point they will get a short signal, and these people tend to act without hesitation on receiving such a signal).

The exact timing on their entry signal will be determined by the parameters specified in their own system, as well as looking at intra-day or an end of day basis, however it is safe to assume that the longer-term trend following systems will no doubt be getting short signals over the coming days if the price of silver continues to fall.

As I have mentioned before, these traders do not trade AT ALL on fundamental data - they simply follow price. Indeed, some of the best trades are when the fundamentals seemingly suggest one thing, and the price suggests going in the opposite direction.

In my own trading, these trend reversals have caused an erosion of open profits, and for a number of positions to be exited as my stops have been hit. Trend following profits tend to arrive in streaks, followed by the inevitable drawdown as existing trends finish. However, as one door closes, another one opens - new trends start to appear, giving more opportunities. Time to look at the short side?
Posted by Trader Steve