Occasionally when utilising a trend following method you have to deal with a ‘V’ shaped reversal. This is where, after moving strongly in your favour, price decides to sharply reverse direction, before your trailing stop has had chance to 'lock in' the bulk of those gains.

This type of price reversal can be the bane of a trend follower. I know my own basic approach struggles with them.

Here is an example of a 'V' shaped reversal. Back in August, the Dow started a short, sharp downtrend, with the extreme of the move seen on 24 August. You can clearly see how the trailing stop (shown by the thin green line) was significantly lagging current price - indeed, the distance between price and the projected trailing stop had significantly increased between when the downtrend started and the extreme of the move. 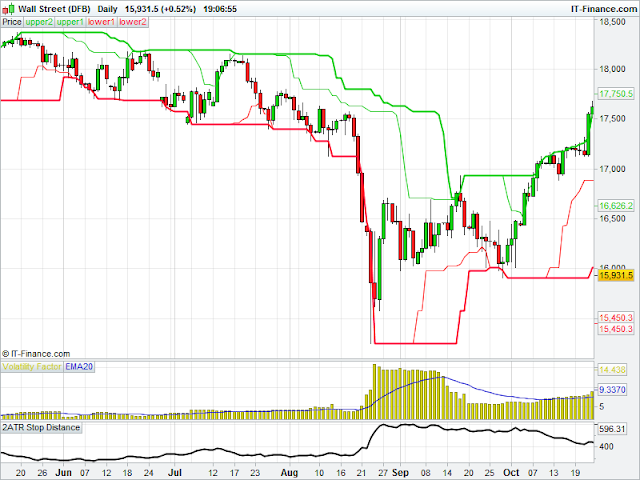 Price rebounded and was then on a direct collision course with the lagging stop, before it finally triggered an exit in September. We can see that a big chunk of those open profits had been lost.

On the one hand you want to let the trade play itself out, and allow your trailing stop to exit the position with the bulk of those gains intact.

However, as we've seen, markets can and do turn around 180 degrees on a dime.

This is where the mindset of a trend follower can be adversely affected. The next time you get into a decent trend, with the trailing stop significantly lagging, your recency bias may be influencing your own thoughts:

“You know what happened last time you were in this position. Better close the trade and take those profits before they disappear”.

So, you close the position, and no doubt feel ‘smart’. Particularly if price starts moving strongly in the opposite direction to that you were trading. You think you've nailed the extreme of the price move.

Only problem is, the markets have a habit of trying to find your weakness as a trader – and succeeding. Within a few days, price has surpassed where you exited. The trend has re-asserted itself. And it then continues the move, with you now left on the sidelines.

To paraphrase Old Partridge in Reminiscences of a Stock Operator, you would “lose your position; and then where would you be?”

So that is the conundrum you face as a trend follower. Certainly when mentoring other traders the ability to let profits run is one of the more difficult skills they have had to learn.

One possible way around this is to monitor the open risk on a position. This approach and other variations have been termed a 'uniform risk exit' approach.

In a quiet, stable trend the trailing stop dutifully follows price a safe distance away from current price action, but running generally parallel to the current price and the new highs/lows being made.

If price starts to accelerate well away from the trailing stop, then your open risk on the position starts to significantly increase.

You enter a long trade at $10, with your initial stop at $9, so the initial stop distance is $1. The open risk on initiating a new position equates to one unit of R.

After entering the position, price starts to accelerate strongly in your favour. Price has risen to $20, but your trailing stop has only moved up to $13. The distance between current price and your trailing stop is $7 – therefore the open risk equates to 7R, seven times bigger than when the trade was initiated!
My own approach is that, once in a trade, I want to be able to reduce risk, rather than increase it. It is for this reason that I avoid pyramiding in my own trading.

While I want to avoid restricting my profits, my primary goal is to control risk. Therefore, I am happy to ‘trade’ in a small part of overall performance in preference to controlling risk and being able to sleep a lot easier each night – especially if price decides to suddenly reverse and gap through my trailing stop. It also helps to avoid the frustration and emotional damage of losing a huge chunk of open profits.

Now of course, this flies in the face of most trend following style approaches. A pure trend following method will shoot for absolute returns. In effect therefore, I have de-tuned the approach slightly, simply to try and control the open risk on a trade.

In this example from early 2014, my entry is denoted by the green arrow, and the exit by the red arrow. In between, you can see how the trailing stop level (denoted by the thin red line) runs beautifully in parallel to the current price and new highs. There is no dramatic widening of the distance between the highs and the trailing stop, meaning that the open risk has remained pretty stable throughout the trade. 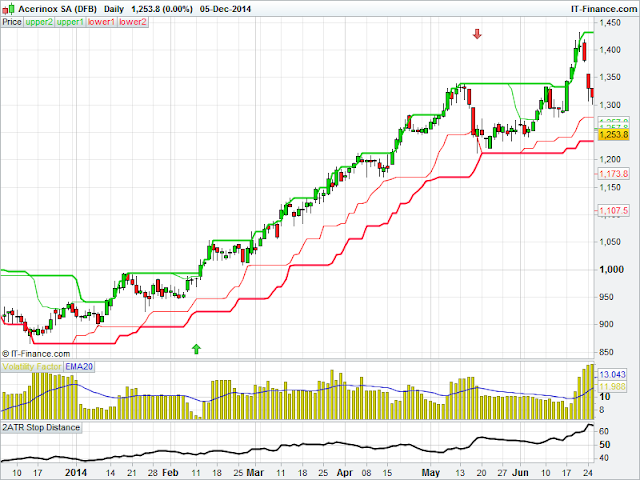 Here is an example from the same period where I did use this partial exit technique (denoted by the first red arrow). On that particular day, price was up more than 70% at one point. You can clearly see the dramatic widening of the gap between the trailing stop line and current price, and consequently a huge increase in open risk. I therefore closed half the position, and let the balance run until my trailing stop was hit (shown by the second red arrow). I talked about this trade here. 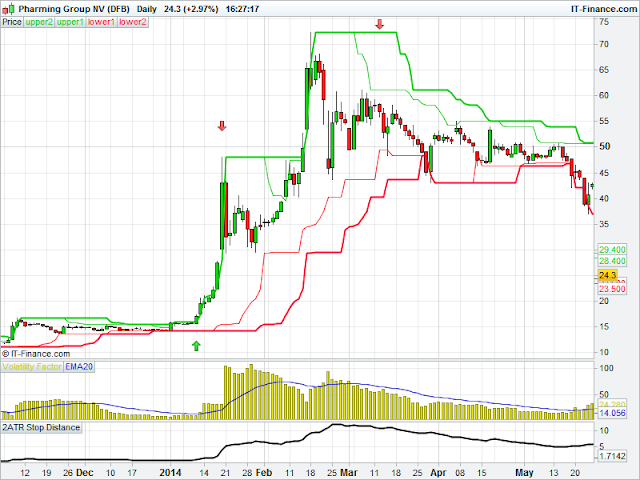 The good thing about this approach is that you are not moving your trailing stop up into a technical "no man's land", which is what a lot of traders do. The stop is still based upon the chart and your chosen parameters, however it has allowed you to reduce your open risk.

I would say here that I use this style of exit very rarely - on most profitable trends the trailing stop runs reasonably parallel to price moving up. It is solely used when there is a huge increase in this level of open risk. At what level you choose to implement such a procedure will vary from trader to trader, and should form part of your trading plan.

I have also seen other variations of this, whereby after taking partial profits, the full position size is re-instated when a new high or low is subsequently made - providing that the trailing stop has moved back up close to current price action.

Either way, you are still participating in the trend, should price continue to move in the direction of your original trade.

So, while a 'V' shaped reversal can be frustrating, there are ways where you can reduce your open risk, and hear the cash register ring - partially insulating yourself from losing too much of your open profits if you then have to deal with such a price reversal.
Posted by Trader Steve