One other metric that is used by people in the trading industry in the Calmar ratio. This takes the annualised compounded returns (usually over a 3 year period) and then divides that by the maximum drawdown. Any result over 3 is pretty good, and anything over 5 is considered to be excellent.

Although only for a period of coming up to 18 months, I have also calculated this, and have shown it on my cash equity curve chart below (click to enlarge). The sample covered is now in excess of 250 trades, and covers periods of favourable and less-favourable market conditions, so as time passes the reading is becoming more statistically accurate. As you can see, the Calmar ratio is currently just over 5. 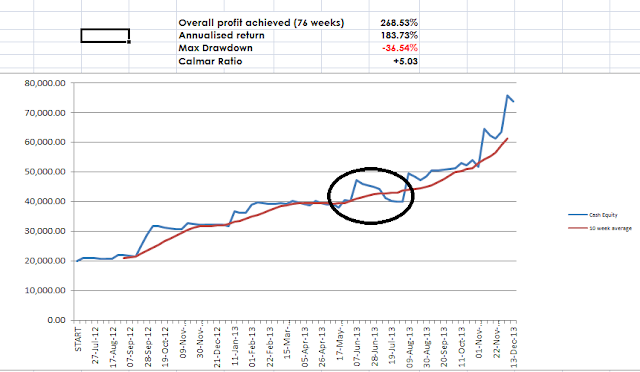 For what its worth, I have also calculated the Calmar ratio based on R's gains and lost. The annualised R gains were +66R, and the biggest drawdown was just over -8.5R. These figures give a Calmar ratio of 7.75. I have not seen it calculated in this manner, but I've shown it simply for comparison purposes.

The figure that alarmed me when doing all this work was the maximum drawdown of 36% (I've circled this period on the chart). This is far higher than I had anticipated, and also more than what most traders or investors could stomach.

Was this figure right? Well, yes it is but there is a big caveat to it.

When calculating my returns, and producing the equity and R curve graphs, I only take into account closed positions. The difference between the overall profit shown at the top of the chart, and the overall returns shown here are the open trades that are currently open.  The reasons for this are:
The period where the drawdown occurred was over a 7 week period in June and July this summer. Ordinarily, this would have led to a significant reduction in the number of trades I was taking. However, remember the basic premise of trend following: Cut the losses short, and let the profits run. July 2013 was my most profitable period in terms of open profits gained. I was in several trades at that time that were going in my favour. Indeed, those profits were discussed here at the time. I sure wasn't going to close those trades prematurely simply to cover other losses banked. No, they were going to be left to run as long as possible, until the exit signal was given.

So, you can now see how my biggest (cash) drawdown occurred at the same time as the single most profitable month! As it happens, when those profitable trends started to give exit signals near the end of August, the cash equity went straight up to new highs. One of those trades initiated in early July was not fully closed until November, and yielded a 26R profit.

Now, if I was not in any profitable trades around that time of the cash drawdown, then my approach would have been totally different. I would have cut right back on taking any new positions, as something would have clearly been wrong. However, I knew from keeping my trading records up to date on a daily basis that my open profits were more than covering any banked losses. I was getting plenty of good looking set ups and signals on my scans. My performance was telling me that there were trends taking off, so I carried on taking signals when they triggered.
Posted by Trader Steve